12) Why do piezoceramics break prematurely?

FAQ: We are having troubles with a new ceramic for transducers current production. It is a PZT-4 that we have been using for years and we have recently found many broken rings on transducers coming back from the field, or right after assembly. It seems to me that the d33 on datasheet is very high: 320, which is 'too much' for a PZT-4. If the d33 is wrong, then we are prestressing too much with PiezoClamping®, isn’t that so? Is there something else (beside a possible bad batch of ceramics) that could be pointed as the cause for PZT premature breaking? Mr. L.S. 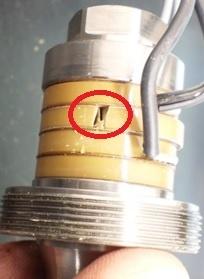 Ultrasonic welding converter with one of its piezoelectric ceramics broken and displaced.

If the d33 is higher than usual, then you are applying lower prestress than expected. A lower prestress allows the rings to move out of the back mass at the high power causing the cracking. In this type of failure, the ring is usually displaced and loses the alignment with the back mass. When the cracks are due to over prestress, the ceramics crack, but do not move out from the back-mass alignment.

The premature breaking may also be caused by poor flatness. You can verify the piezo ring flatness with a comparator stand. Check also the transducers bolt resistance class you are using.